Why Does My Dog Eat Poo?

Why does my dog eat poo?

Eating poop is a common behaviour in dogs but is one of their less endearing characteristics! It even has a scientific name – coprophagia. The faeces in question is often from another species (horse manure, cat poo and fox poo are favourites!), but some dogs may eat their own or those of another dog.

So why do they do it? We have attempted to tackle some of the common explanations for this behaviour to give you a better idea of why your dog may be indulging in the smelly stuff!

They’re feeling under the weather.

Most dogs that eat poop do not show any symptoms of being unwell before or after eating it. For many poop-eaters, it just forms part of their daily routine, and no association with ill health has been proven.

Do keep an eye out for any signs of ill health though, such as vomiting, diarrhoea or weight loss. If you have any concerns, or if they have suddenly started eating poop, then please seek veterinary advice.

They have a nutrient deficiency.

There is no evidence for this claim. It also seems unlikely, given that many dogs that eat poo regularly are fed a commercially prepared complete diet, which contains all of the nutrients that they need in the correct quantities.

This is certainly possible. Ensure that you are feeding their diet in the correct quantity and that you are ideally feeding them twice a day – speak to your vet if you’re not sure.
Some medications cause an increase in appetite, and this can occasionally lead to poop-eating behaviour. Let your vet know if this has started after the introduction of a new medication.

It is normal for a nursing bitch to eat her puppies’ poo, so this should never be discouraged.
Puppies will sometimes also eat poo as they explore their environment, but this behaviour should normally pass. 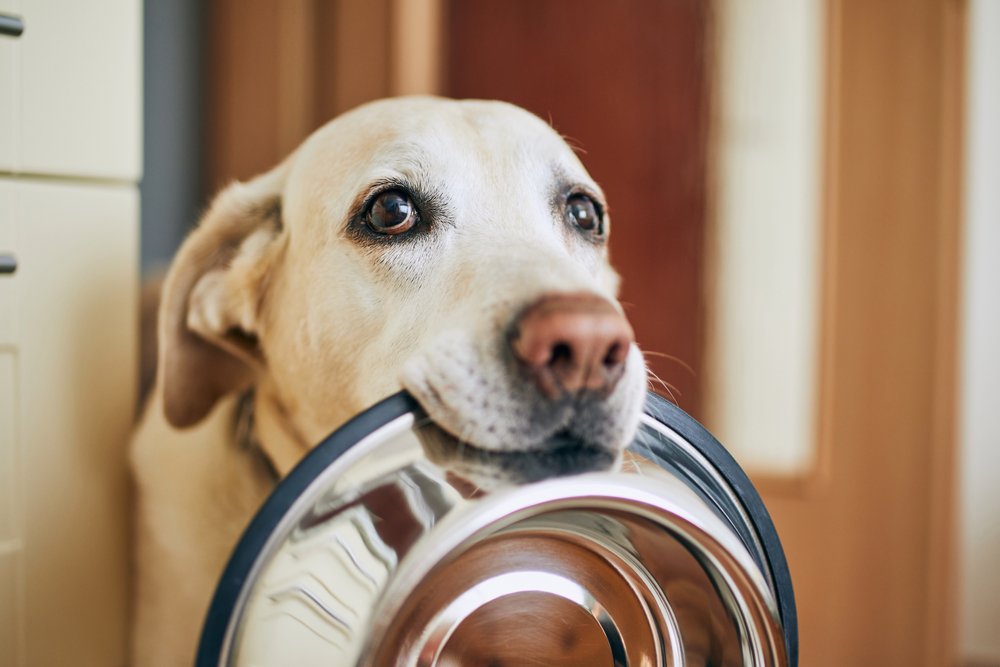 This may well be the case and is probably the most likely explanation for poop-eating!

They have intestinal worms.

Possibly. Certainly, dogs that eat poop are at a greater risk of picking up worms, even if they didn’t have them to begin with. For this reason, it is a good idea to keep your dog regularly wormed if they eat poop.

At PocketVet we offer a subscription service for flea and worming treatment, so once this is set up your pet’s medication automatically arrives when it is next due. One less thing to remember!

They are bored or anxious.

This may be the case for some dogs, with poo-eating becoming a habit a bit like a person who bites their nails.

It is a good idea to make sure your dog has plenty of enrichment through play and exercise, using toys and aids such as puzzle feeders to keep them occupied!

Is there any risk to my dog eating poop?

It is sensible to try and discourage your dog from eating poo as it may be bad for their health. For example, horse manure may contain worming medication that could be dangerous for your dog.

Also, poop may contain worms and so by eating it your dog may become infected (hence it is a good idea to worm them regularly if they are a poop-eater!).

How can I stop my dog eating poop?

If your dog is eating cat poop then make sure the litter tray is out of their reach (behind a child gate with an in-built cat fap for instance, or built into a cupboard) and clear it out regularly.

If your dog’s dirty habit is getting out of control then please speak to your vet, who will give them a thorough physical examination and may then suggest referral to a behaviourist for further help and advice.